Many US consumers may be unaware of bear farms in Asia—facilities in which bears are trapped for years in tiny cages and their bile is painfully extracted for use in Asian medicinal products. Moreover, they may not realize that their purchasing practices could inadvertently provide support for bear farming activities. A new campaign by the World Society for the Protection of Animals (WSPA), profiled in this issue, aims to increase consumer knowledge about bear farms and demonstrate to Asian companies that participation in the bear bile industry could negatively impact their sales in US markets.

Another article in this issue examines a few of the 100+ herb-related “apps” for the iPhone and iPod Touch. Additionally, a report in this issue covers a recent conference of the United Natural Products Alliance (UNPA) and University of Mississippi, which focused on inspections of dietary supplement companies by the US Food and Drug Administration for compliance with good manufacturing practices (GMPs).

Attendees of Natural Products Expo West, taking place March 11-14 in Anaheim, California, are encouraged to visit ABC’s booth. ABC Founder and Executive Director Mark Blumenthal will serve as moderator for the “Stump the Herbalist” session (Friday, March 12, at 8:30 am), in which herbal experts showcase their botanical knowledge through a fun, game-show-styled format. ABC will also hold its annual “Celebration” and awards ceremony at Expo West (open to invited guests). We hope to see you there!

HerbalGram 85 features an article on the moon’s possible influence on medicinal plants’ phytochemistry. The history and 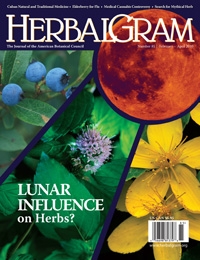 current state of natural and traditional medicine in Cuba are also profiled in this issue, as is a new project working to promote sustainable management of traditional medicinal plants in China’s Upper Yangtze ecoregion. Another article explores the government contract that controls production and distribution of marijuana for clinical research and how some researchers are challenging this arrangement.

March's selected book excerpt comes from Plants of Semillas Sagradas: An Ethnomedicinal Garden in Costa Rica, written by Rafael Ocampo and Michael J. Balick and published in 2009. This excerpt contains a description of the book and a link to the entire book in PDF format. All are available here.

McCain Defends Supplements Bill. Natural Products Marketplace. 2-26-10. Senator John McCain has attempted to clarify what he says have been misinterpretations of his dietary supplement regulation bill, although industry representatives continue to find problems with the proposed legislation.

Devil’s Claw Brings in Money for Locals. New Era. 2-23-10. The government of Namibia is working with local communities to ensure the sustainable and profitable harvesting of devil’s claw growing in or near national parks.

UK Urged to Stop Funding Homeopathy. The Guardian. 2-22-10. A House of Commons science and technology committee recently told the National Health Service that it should cease its million-dollar funding of homeopathic medicine because it lacks evidence of efficacy.

Kenyan Herbal Medicines Could be Harmful. Daily Nation. 2-7-10. A Kenyan government laboratory recently tested 18 samples of herbal medicines sold in clinics and stores and found all of them to be contaminated with harmful substances.

Herbal Remedy Users Have Worse Asthma. WebMD. 2-3-10. A survey of 326 inner-city adult asthma sufferers found that those who take herbal remedies tend to have worse symptoms and use their inhalers less often.

The Federal Trade Commission (FTC) Warns Marketers of Children's Omega-3 Supplements that Brain and Vision Claims May Be Deceptive. Press release from FTC.

WSPA Launches New Campaign to Help End Bear Farming in Asia. The World Society for the Protection of Animals has developed a webpage to aid consumers and practitioners in uncovering whether Traditional Chinese Medicine products available in US markets are produced by Chinese c